Vancouver, BC, November 28, 2017 – IsoEnergy Ltd. (“IsoEnergy” or the “Company”) (TSXV: ISO; OTCQX: ISENF) is pleased to announce that it has staked three new properties: Fox, East Rim and Full Moon in the Eastern Athabasca Basin of Saskatchewan. Each of these properties is 100% held by the Company. Figure 1 shows the location of the new properties relative to IsoEnergy’s other Saskatchewan properties and each of them is described in more detail below. The Company has also staked additional claims that have been added to its high priority Geiger project purchased from AREVA Resources Canada (AREVA), Cameco Corp. (Cameco) and JCU (Canada) Exploration Ltd. (JCU) in August of this year.

The Fox property was staked on October 26th and consists of two contiguous claims totaling 1,374 hectares located 15 kilometres north of Cameco’s Key Lake uranium mill (Figure 2). Fox is surrounded by over 425M lbs of uranium (U3O8) at an average grade of 5.2% U3O8 in mined-out and undeveloped deposits at Key Lake, (Cameco and AREVA), Millennium (Cameco and JCU) and Wheeler River’s Phoenix and Gryphon deposits (Denison Mines Corp., Cameco and JCU) all of which are within 25 kilometres of the Fox property. Importantly, both Millennium and Gryphon are primarily basement hosted deposits. Infrastructure in the area is excellent, with the southern edge of the claims being within one kilometer of Fox Lake road which provides year-round exploration access.

According to Saskatchewan government records, no exploration drill holes have ever been completed within the boundary of the Fox property, despite the presence of a 4.5-kilometre-long zone of low magnetic susceptibility that spans the property in a north-south direction and may indicate the presence of prospective metasedimentary basement rocks. Mineralization at Cameco’s Millennium deposit follows a similarly oriented trend. Depth to the sub-Athabasca unconformity, based on drill holes on nearby properties, is estimated to be between 205 and 400 metres. Exploration plans are being developed and will likely include initial geophysical surveying over the magnetic low trend followed by core drilling of high priority targets.

Several prominent magnetic low trends with historic conductors are present on the Full Moon property, including a portion of the Tuning Fork conductor system that extends on to the property from Denison Mining Corp.’s Hatchet Lake project. Previous drilling at Tuning Fork has intersected intense basement clay alteration with weak uranium mineralization and strong uranium pathfinder mineralization. Similar to the Fox and East Rim properties, the Full Moon property is underexplored with only 17 historic drill holes within the property boundary.

Finally, a total of 1,605 hectares was staked over eight claims on November 7th and 21st near the Geiger property (Figure 5). As the new claims are all within 5 kilometres of Geiger, they will be treated as an extension of Geiger henceforth.

The new claims cover several magnetic low trends with local electromagnetic conductors. According to Saskatchewan government records, only five holes have ever been drilled on the new claims. All of these holes were vertical and were drilled in a tight cluster near drill hole Q24-1 which intersected 0.11% U3O8, 0.21% Ni and 0.17% Mo over 0.3 metres in basement rocks, just beneath the sub-Athabasca unconformity. Three follow-up holes were drilled within 200 metres of Q24-1 on section, and one was drilled 200 metres along strike to the south. The potential for additional basement mineralization in the area is considered to be excellent.

Craig Parry, Chief Executive Officer commented: “These new claims are important additions to our Eastern Athabasca uranium property portfolio. The addition of these claims is consistent with our strategy of increasing our land position and target list at low cost in the world’s premier uranium district. The new properties all satisfy our acquisition criteria with their location in the heart of the eastern Athabasca basin near several high-grade uranium deposits or occurrences, the presence of prospective geophysical signatures, a paucity of drilling, thin sandstone cover and location near important infrastructure. Our team is eagerly looking forward to exploring this new ground.”

The scientific and technical information contained in this news release was prepared by Steve Blower, P.Geo., IsoEnergy’s Vice President, Exploration, who is a “qualified person” (as defined in National Instrument 43-101 – Standards of Disclosure for Mineral Projects). Mr. Blower has verified the data disclosed. This news release refers to properties other than those in which the Company has an interest. Mineralization on those other properties is not necessarily indicative of mineralization on the Company’s properties.

IsoEnergy is a well-funded uranium exploration and development company with a portfolio of prospective projects in the eastern Athabasca Basin in Saskatchewan, Canada and a historic inferred mineral resource estimate at the Mountain Lake uranium deposit in Nunavut. IsoEnergy is led by a Board and Management team with a track record of success in uranium exploration, development and operations. The Company was founded and is supported by the team at its major shareholder, NexGen Energy Ltd. 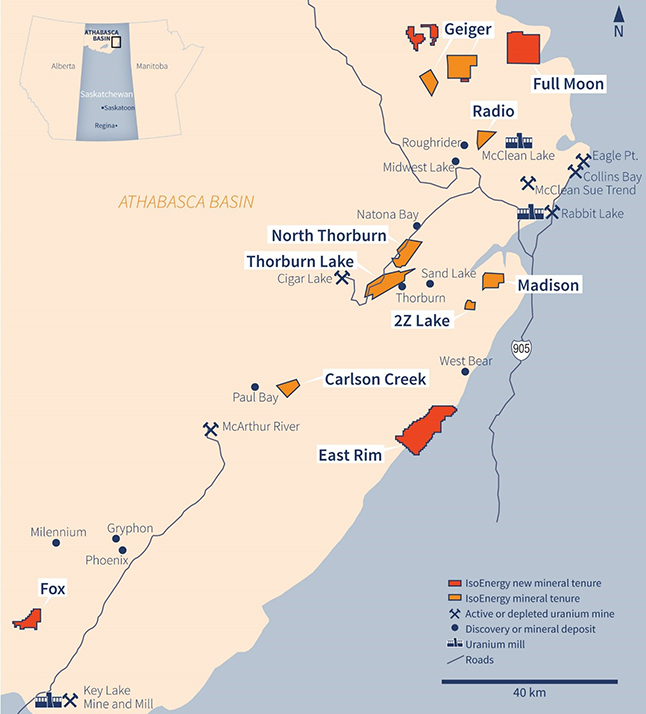 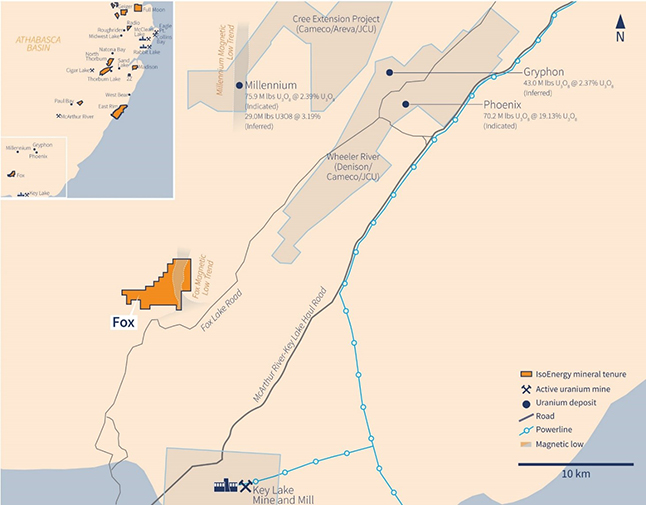 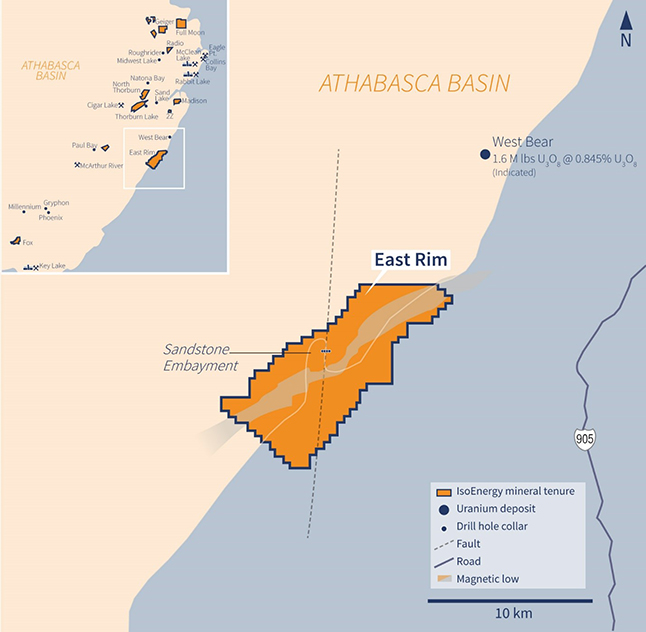 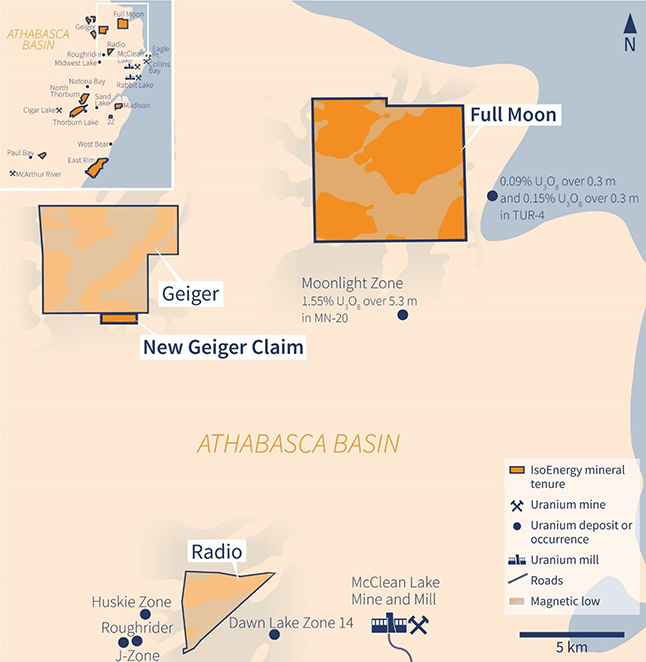 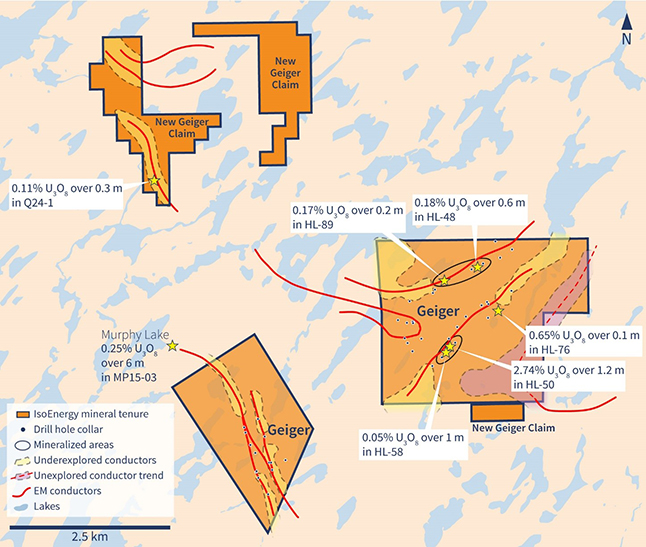 The information contained herein contains “forward-looking statements” within the meaning of the United States Private Securities Litigation Reform Act of 1995 and “forward-looking information” within the meaning of applicable Canadian securities legislation. “Forward-looking information” includes, but is not limited to, statements with respect to the activities, events or developments that the Company expects or anticipates will or may occur in the future, including, without limitation, planned exploration activities and completion of the acquisition of the Property. Generally, but not always, forward-looking information and statements can be identified by the use of words such as “plans”, “expects”, “is expected”, “budget”, “scheduled”, “estimates”, “forecasts”, “intends”, “anticipates”, or “believes” or the negative connotation thereof or variations of such words and phrases or state that certain actions, events or results “may”, “could”, “would”, “might” or “will be taken”, “occur” or “be achieved” or the negative connotation thereof.

Such forward-looking information and statements are based on numerous assumptions, including among others, that the results of planned exploration activities are as anticipated, the price of uranium, the anticipated cost of planned exploration activities, that general business and economic conditions will not change in a material adverse manner, that financing will be available if and when needed and on reasonable terms, that third party contractors, equipment and supplies and governmental and other approvals required to conduct the Company’s planned exploration activities will be available on reasonable terms and in a timely manner and that the acquisition of the Property will be completed on the terms currently agreed to. Although the assumptions made by the Company in providing forward-looking information or making forward-looking statements are considered reasonable by management at the time, there can be no assurance that such assumptions will prove to be accurate.