Drill Program to Follow Up on High-Grade Uranium Mineralization Will Commence with Winter Freeze Up.

Steve Blower, Vice President, Exploration commented: “The drilling targets generated by the integration of trace element geochemistry, clay mineralogy and structural geology are encouraging and suggest that there is a high probability of expanding the Hurricane zone in several directions.  The follow-up drill campaign scheduled for the winter drilling season beginning in January, 2019 will be exciting.”

Mineralization at the Hurricane Zone (see the location map in Figure 1) lies beneath 40 metres of overburden and 285 metres of Athabasca sandstone.  Basement rocks are dominated by pelitic gneisses that are commonly highly graphitic.  Drill hole LE18-01A intersected an 8.5-metre-long interval of uranium mineralization that straddles the sub-Athabasca unconformity and consists of fracture controlled and disseminated pitchblende with hematite and clay from 338.5-347.0 metres (down-hole length).  On the LE18-01A cross-section (Figure 2) there are several features that indicate the unconformity hosted mineralization may extend both to the northwest and to the southeast.  Additionally, there is a strong possibility that basement hosted mineralization is present in the immediate area.  The features that define all three of these target types are described in more detail below, and each target area is shown on the cross-section in Figure 2.

Above and to the northwest of the mineralization, the sandstone in drill hole LE18-01A is highly fractured, bleached and clay altered.  This alteration is cored by several faults that cut the sandstone at 119, 146, 181, 251, and 325 metres.  Alteration surrounding these faults is generally elevated in uranium and common uranium pathfinder elements.  Further, the sandstone clays are dominated by a complex and favourable mixture of illite and kaolinite, with a marked absence of less favourable dickite.  The unconformity at the down-dip projection of the sandstone hosted faults is highly prospective for additional high-grade uranium mineralization.

Additionally, to the southeast, basement rocks immediately beneath the mineralization consist dominantly of bleached and clay-rich graphitic cordierite augen gneiss that host two large fault zones (evident as cataclasites) at 354.7-356.3 metres and 423.2-431.5 metres.  These brittle faults are likely responsible for a 15 metre difference in the unconformity elevation between drill hole LE18-01A and historical drill hole KER-12.  Geochemically the faults and/or the graphitic gneisses surrounding them are enriched in many key uranium pathfinder elements including arsenic, cobalt, copper, molybdenum and nickel.  Similar to the faults in the sandstone, the projection of these structures up-dip to the unconformity is a likely location for expansion of the Hurricane zone mineralization.

Elevated uranium pathfinder geochemistry and strong basement bleaching and clay alteration along the graphitic faults intersected in drill hole LE18-01A strongly suggests that additional uranium mineralization may be present deeper in the basement.  IsoEnergy’s technical team will use its experience with basement hosted mineralization to vector along the basement structures toward structural dilation zones with high potential to host significant uranium deposits.

Larocque East consists of 6 mineral claims totaling 3,200 hectares and was recently purchased in May, 2018.  The Property is owned 100% by IsoEnergy and is not encumbered by any royalties or other interests.  Larocque East is immediately adjacent to the north end of IsoEnergy’s recently expanded Geiger property and is 35 kilometres northwest of Orano Canada’s McClean Lake uranium mine and mill.

The Property covers a 15-kilometre-long northeast extension of the Larocque Lake conductor system; a trend of graphitic metasedimentary basement rocks that is associated with significant uranium mineralization in several occurrences to the southwest of the Larocque East property.  The closest of these are the Larocque Lake and Larocque North zones, which are located 6.5 kilometres and 0.4 kilometres, respectively, to the southwest of the western Larocque East property boundary.  Drilling at the Larocque Lake zone has returned intersections of up to 29.9% U3O8 over 7.0 metres in drill hole Q22-040.  Larocque East is located adjacent to the Wollaston-Mudjatik transition zone - a major crustal suture related to most of the major uranium deposits in the eastern Athabasca Basin.  Importantly, the vertical distance from surface to the unconformity is short, ranging between 140 metres and 330 metres in previous drilling.  A total of 23 historical drill holes have been completed on the Property along approximately 22 kilometres of graphitic conductors.

The three target types at the Hurricane zone outlined herein warrant aggressive follow-up drilling, both on-section and along-strike of the unconformity hosted mineralization, and down-dip along the basement structures.  IsoEnergy’s follow-up drilling strategy will be finalized in the coming weeks, and will likely start with additional closely-spaced fence holes on section with LE18-01A, followed by modest step-outs along strike to both the east and west.  Drilling is planned to resume in January, 2019 after freeze-up to allow ground access into the area. 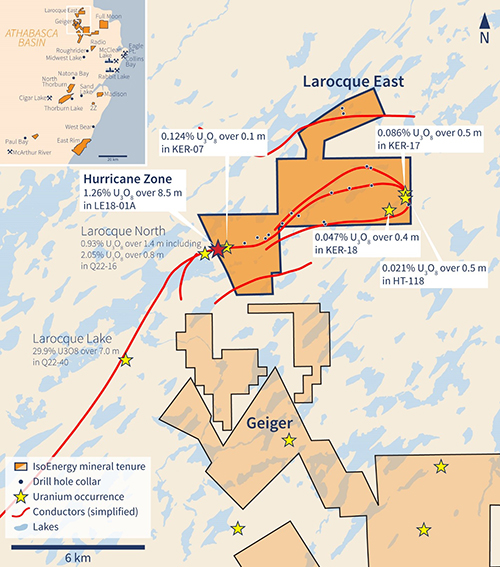 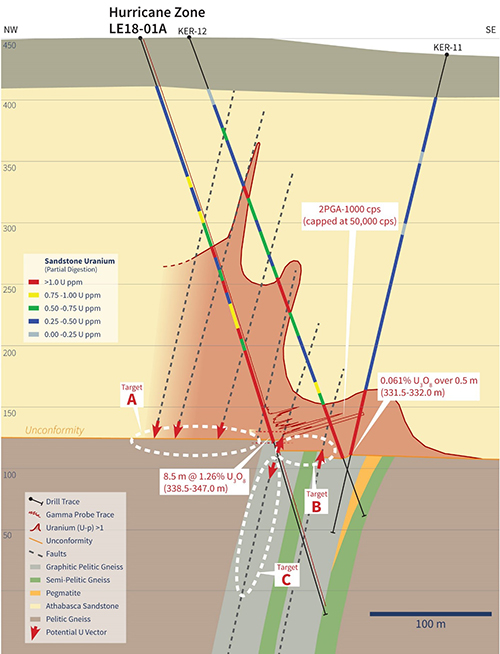 The scientific and technical information contained in this news release was prepared by Steve Blower, P.Geo., IsoEnergy’s Vice President, Exploration, who is a “qualified person” (as defined in National Instrument 43-101 – Standards of Disclosure for Mineral Projects).  Mr. Blower has verified the data disclosed.  This news release refers to properties other than those in which the Company has an interest. Mineralization on those other properties is not necessarily indicative of mineralization on the Company’s properties.  As drill hole LE18-01A was drilled steeply at -70 degrees and the mineralization is interpreted to be horizontal, the true thickness is expected to be approximately 90% of the cored intervals.  Sample preparation and analyses were completed at SRC Geoanalytical Laboratories in Saskatoon, Saskatchewan.  Uranium assays at SRC are by Inductively Coupled Plasma – Optical Emission Spectroscopy (ICP-OES) and quality is controlled through the inclusion of internal duplicates, blanks and standards.

IsoEnergy is a well-funded uranium exploration and development company with a portfolio of prospective projects in the eastern Athabasca Basin in Saskatchewan, Canada and a historical inferred mineral resource estimate at the Mountain Lake uranium deposit in Nunavut.  IsoEnergy is led by a Board and Management team with a track record of success in uranium exploration, development and operations.  The Company was founded and is supported by the team at its major shareholder, NexGen Energy Ltd.

Such forward-looking information and statements are based on numerous assumptions, including among others, that the results of planned exploration activities are as anticipated, the price of uranium, the anticipated cost of planned exploration activities, general business and economic conditions will not change in a material adverse manner, that financing will be available if and when needed and on reasonable terms, that third party contractors, equipment and supplies and governmental and other approvals required to conduct the Company’s planned exploration activities will be available on reasonable terms and in a timely manner. Although the assumptions made by the Company in providing forward-looking information or making forward-looking statements are considered reasonable by management at the time, there can be no assurance that such assumptions will prove to be accurate.