Tim Gabruch, President and Chief Executive Officer commented: “IsoEnergy is very encouraged by the results that were intersected at all three properties drilled this summer. These results, along with the geophysical work undertaken, are providing highly valuable information as we plan systematic follow up targets for the winter and broader 2023 exploration programs.”

Andy Carmichael, Vice President of Exploration commented: “At Larocque East, the Kernaghan trend was upgraded by the intersection of a broad zone of pervasive basement alteration. This conductive trend has been tested on a single fence within the project and is a high-priority follow-up exploration target. Results at Trident exceeded our expectations with prospective graphitic structures being intersected in three target areas, opening a significant amount of strike length for further exploration. Drilling at Geiger to follow-up winter geophysical surveys intersected sandstone-hosted alteration and structure in both areas and basement-hosted hydrothermal alteration at Q23. This fall, we look forward to receiving final interpretations of the airborne geophysical survey work as well as the geochemical results from the summer drilling to further refine 2023 exploration campaigns.”

Six drill holes totalling 1,998m were completed on the Larocque Lake and Kernaghan Lake conductive trends (Figure 2). In the Hurricane East area, located within two kilometres of the Hurricane Deposit, three drill holes followed up strongly anomalous sandstone geochemistry and alteration intersected by previous IsoEnergy drilling. Favourable alteration and structure were encountered but no mineralization was intersected. On an underexplored section of the Larocque Lake trend in the eastern portion of the project, one hole was drilled, LE22-142, which intersected weak to moderate alteration and structure in the upper sandstone above graphitic basement. Follow-up will be guided by geochemical results. The remaining two drill holes tested the Kernaghan trend where historical drilling intersected anomalous sandstone geochemistry and defined over 40m of unconformity relief. Drill hole LE22-144, designed to locate a structure inferred to be located between the two historical drill holes, intersected a broad zone of variable argillization and hematization in the basement associated with faulting. Planning is underway to follow up these results in 2023.

Eight holes totalling 3,357m were completed at Geiger to follow-up conductors identified by geophysical surveys carried out in the Q23 and Q48 areas during the winter 2022 season (Figure 4).

Four holes completed in the Q23 area targeted moderate to strong conductors. GG22-31 intersected high-strain graphitic gneiss and pervasive argillization which extends 55 metres into the basement and completely overprints the regional paleoweathering profile. GG22-31 is located 4.5km south of the radioactive intersection in drill hole ML22-006, recently announced by Fission 3.0 Corp. on the neighboring Murphy Lake property. The Geiger project covers 3.4km of the interpreted strike between GG22-31 and ML22-006.

Four holes were completed in the Q48 area, including a three-hole fence across the centre of the winter 2022 survey area. Sandstones in the central drill hole, GG22-34, are pervasively bleached with metre-to decametre-scale zones of structure, desilicification, and clay alteration which increase in width and strength toward the unconformity. Conductive rocks were intersected in the basement well below the unconformity. In GG22-35, located 200m to the west, the upper 115m of sandstone is pervasively bleached and contains zones of silicification and clay-lined fractures associated with abundant structures including quartz-healed breccias. These results upgrade the central conductive trends at Q48.

Planning is underway to continue exploration of the Q23 and Q48 areas. Pending geochemical results will guide follow-up.

Airborne geophysical surveying totalling more than 5,000 line-kilometres was completed over IsoEnergy’s Evergreen, Spruce, East Rim, Full Moon and Edge projects in June and July (Figure 1). The survey utilized Xcalibur’s FALCON® Airborne Gravity Gradiometer system to acquire high-resolution gravity gradient, magnetic, and radiometric (spectrometry) datasets. Survey data were received in late August and interpretation of results is underway. Gravity gradient and magnetic data are expected to improve understanding of basement geology and assist in the identification of potential alteration zones, while radiometric results will be followed up with ground-truthing to locate near-surface showings and radioactive boulder trains such as those that led to the discovery of several notable uranium deposits including Triple R and Key Lake.

Nine claims totalling 4,349 hectares were recently staked in the Eastern Athabasca (Figure 1). Six of the new claims were staked at Larocque East to cover an approximately 4km long interpreted western extension of the Kernaghan Lake conductive trend and to link the Larocque East and Larocque West projects. Two claims staked 16km northwest of the McArthur River Mine form the new Rapid River Project, which is interpreted to cover approximately 2.5km of the Ens Lake conductive trend and a 3.5km extension of the Fox Lake trend, host of the Fox Lake Deposit. One additional claim was staked to link the Madison and 2Z projects. 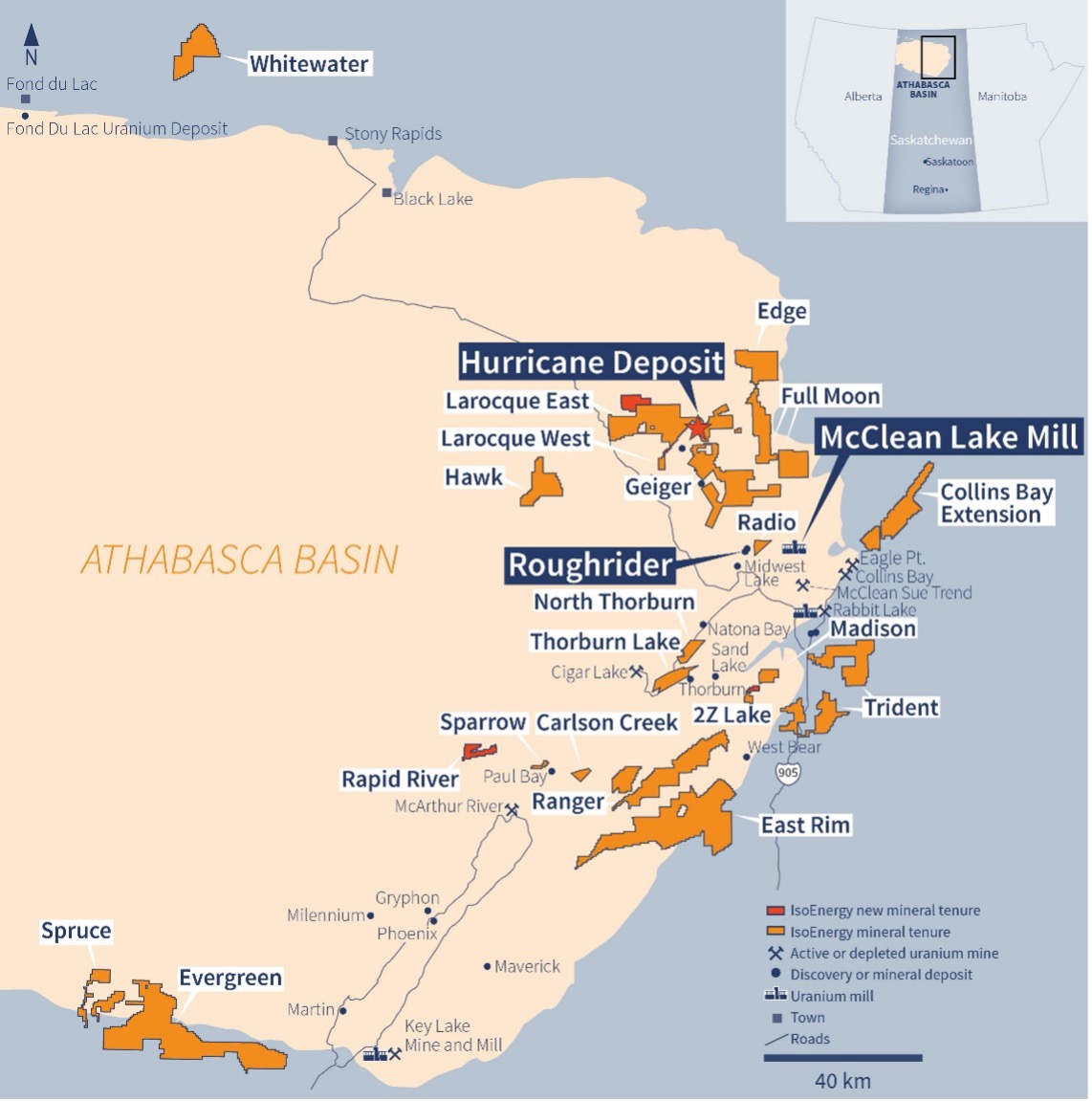 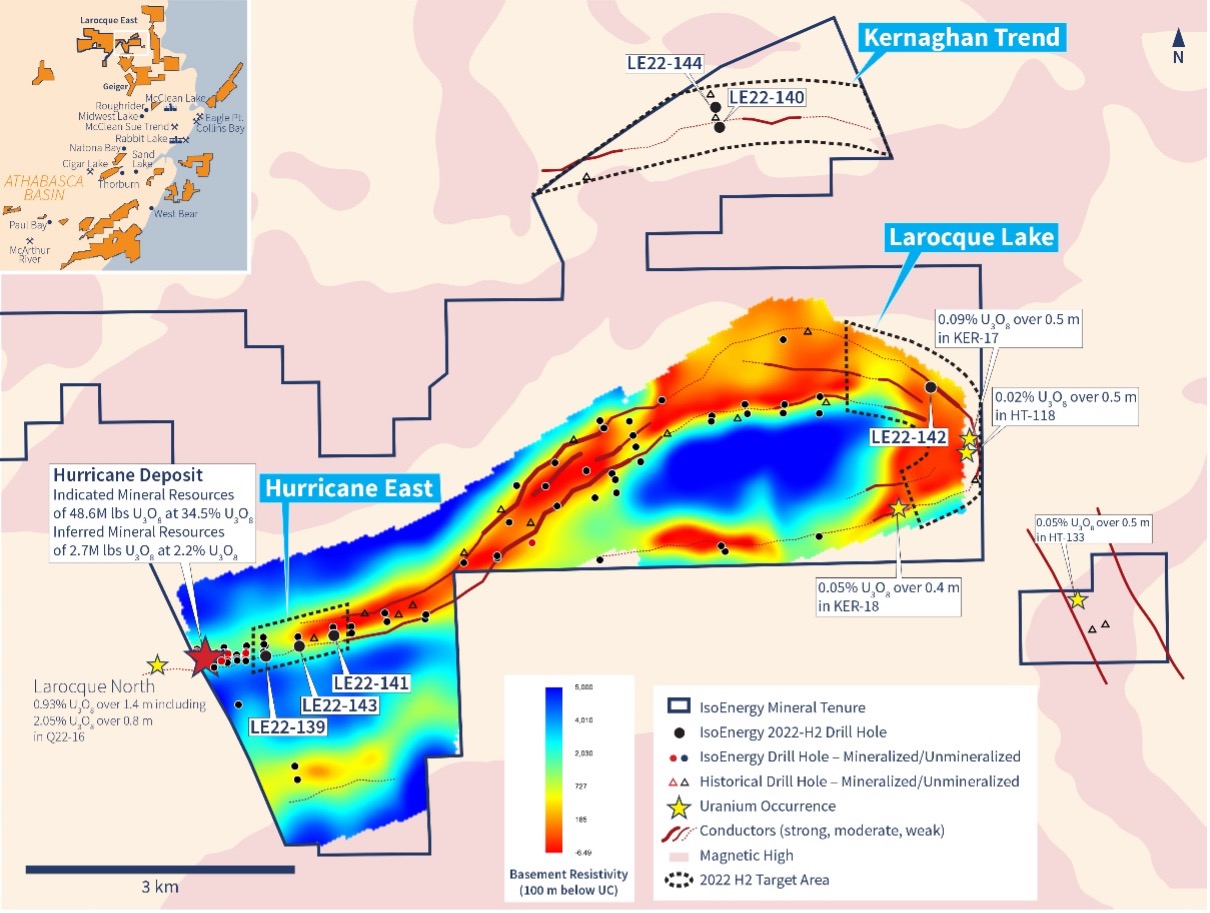 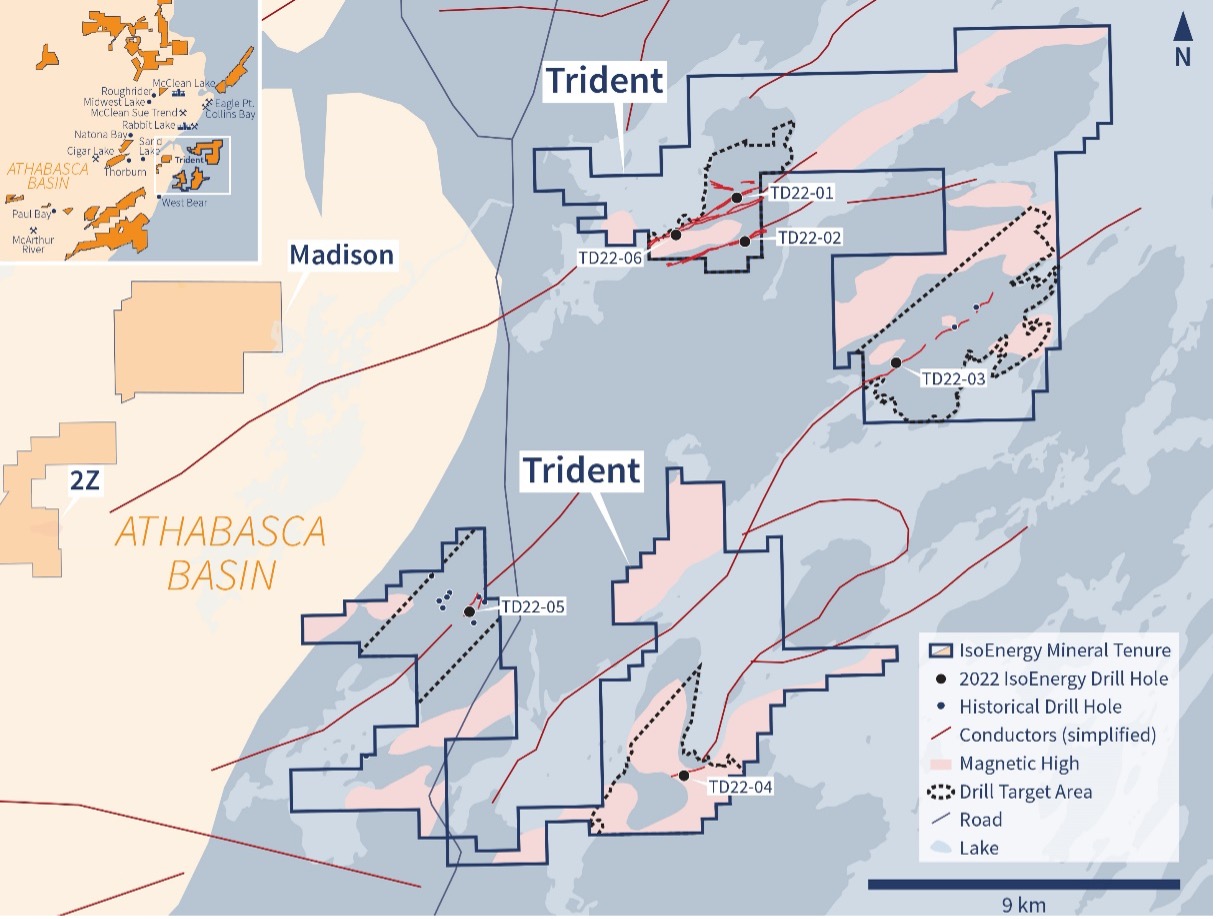 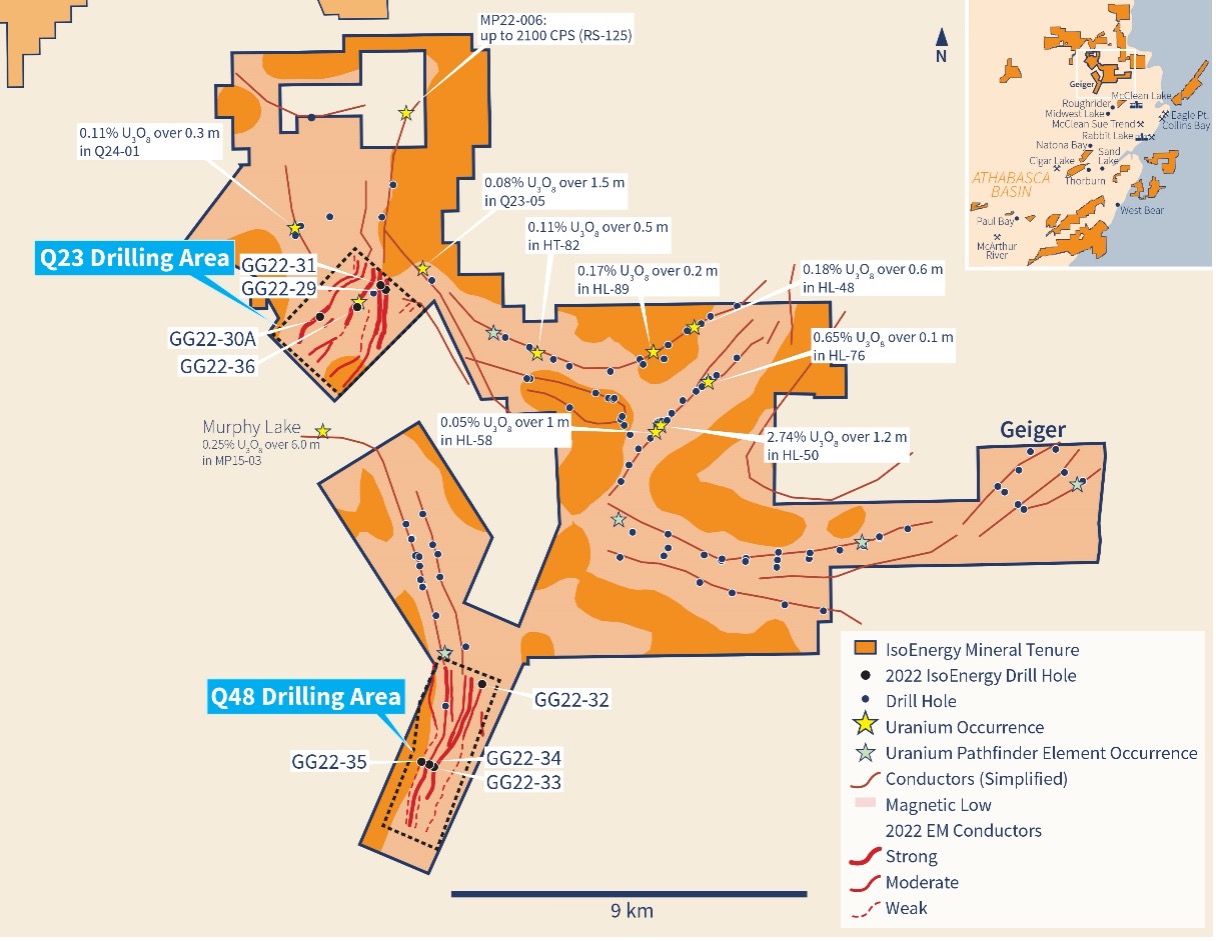 Andy Carmichael, P.Geo., IsoEnergy’s Vice President, Exploration, is the “Qualified Person” (as defined in NI 43-101 – Standards of Disclosure for Mineral Projects) for the Company and has validated and approved the technical and scientific content of this news release. All radioactivity measurements reported herein are total gamma from an RS-125 hand-held spectrometer. All chemical analyses are completed for the Company by SRC Geoanalytical Laboratories in Saskatoon, SK. For additional information regarding the Company’s Larocque East Project, including its quality assurance and quality control procedures applied to the exploration work described in this news release, please see the Technical Report titled “Technical Report on the Larocque East Project, Northern Saskatchewan, Canada” dated August 4, 2022, on the Company’s profile at www.sedar.com.This news release refers to properties other than those in which the Company has an interest. Mineralization on those other properties is not necessarily indicative of mineralization on the Company’s properties.